Years ago I was asked out on a date by a man of great intellect. I was interested because he was of great looks as well. He wanted to go for coffee and a stroll through Borders. I had really been hoping to try out a new bar that sounded fun, but it didn’t seem to be on his radar. I am of the belief that a cocktail usually helps break the ice…. We strolled through the book store and it was clear early on that we were not going to be a match. He was very thoughtful and serious at surface level, whereas I was, well, not. We strolled by a book and he stopped and clutched it and said how much he loved the book. I had seriously never even heard of it and just kind of nodded so I didn’t have to lie, but also not admit I had no clue. After the date I recounted it with my mom and asked her if she had ever heard of the book, “Agape Agape”, only I pronounced it as “a grape” without the ‘r’. She died laughing and I said that clearly I had made the right choice by staying quiet and we were DEFINITELY not well suited.

Despite my lack of knowledge of “Agape Agape”, I love to read. It has been a challenge finding time for it now that I have the tiny one, but it is a great joy in my life. I love a rich story and I love to meet new characters and know their innermost secrets. There is nothing better than being alone and awake in the middle of the night, reading while the night is silent around me. It is my time with new friends. My very favorite book is “The Power of One” by Bryce Courtenay.

The narrative is lush and colorful and the characters resound in your heart long after you put the book down. I just finished a trilogy that my mother recommended and, again, I could not put it down. Instead of anxiously awaiting little T waking up so we could play, I found myself enjoying his nap so I could read. I was sad when the books ended. The trilogy is called “The Spoils of Time” by Penny Vincenzi. The books “No Angel”, “Something Dangerous”, and “Into Temptation” follow the lives of a family through 3 generations and are simply fascinating. 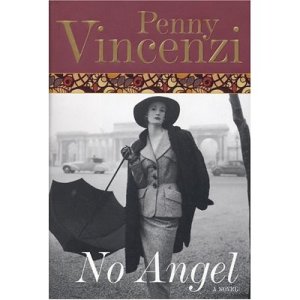 The titles sound like a romance novel, but they aren’t. Not that I am judging; clearly it would be hypocritical.

Facing the Music of Marriage & Motherhood

Shift Your Perspective, Change Your Life

There's more than one right way to improve your child's sleep.

My life, my thoughts, my insights

This WordPress.com site is the cat’s pajamas

Daily Thoughts and Meditations as we journey together with our Lord.

Not a "how to be a great parent" blog

If there is any magic in this world...

The world can be amazing when you are slightly … strange!

The wacky stories of a crazy lady.

A Blog of the Ridiculous and Sublime, by Mark Sackler

The Coyote Thistle
lezoemusings.wordpress.com/
A Girl and Her Thumb

there is no destination...